Claude Bouchard is one of the first colonists to settle in Quebec in mid-17th century. Claude Bouchard’s family first settled in Petite-Rivière-Saint François, near Baie-Saint-Paul in the Charlevoix region. His family of descendants migrates north and then settles in Lac-Saint-Jean, where the soil has become workable cultivation after the great fire of 1870. At the start of the 20th century, the Bouchard family acquires some land on rang Saint-Eusèbe in St-Félicien from the government, which has now been known as the family farm for the last five generations. 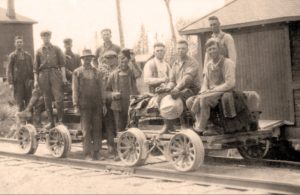 The soil on rang Saint-Eusèbe in Saint-Félicien is light, sandy and contains silt. François-Nil, who is the grandfather of the new owners Annie and Carl Bouchard, along with Valérie Lefebvre, is one of the first cultivators in Saint-Félicien to have a tractor.

Coming from a family of 15 children, Gérard and Rodrigue Bouchard (Annie and Carl’s father and uncle), are the first family members to work as full-time farmers. In 1971, Gérard bought the neighbouring land to his father’s. He works with him for nearly five years and is then joined by Rodrigue. They both instinctively felt resistance towards the emergence of chemical fertilizer in the 70s therefore took up research on managing soils and animal health. 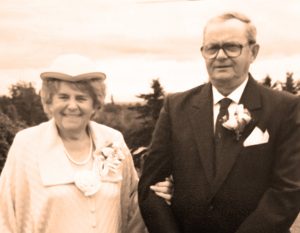 Their animal’s precarious health as well as the soil’s lightness making it less prone to cultivation and some financial problems, pushes Gérard and Rodrigue’s curiosity towards organic farming. They read Engrais vert et fertilité du sol, by Joseph Pousset, which became a revelation to them. They undertake putting the emphasis on plants that grow in a natural state rather than attempting to modify their soil. Through trials and experimentations, they eliminate the one-time fodder recommended by the agri-food industry at the time. They search for the right balance and conceive an operating philosophy based on the quality of living, the soil’s and animal’s health as well as the farmer’s decisional power who is the only one to truly understand its environment. 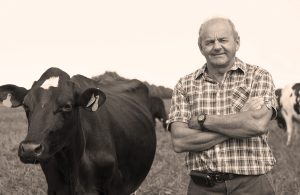 ”We noticed that we needed to feed our cows with grass for them to be healthy and to take the animal manure to enrich the fields and give them a balanced fodder that grows on our land. When they are outside, the cows have access to a variety of plants. We even offer them the same variety over the winter months” they say convincingly 45 years later!

Pioneers in organic farming during the 1980s and nicknamed the “indestructible Vikings” from Lac-Saint-Jean, Gérard and Rodrigue are part of the rare 1% of Quebecois farmers that adopt organic farming, the one that respects the environment and all things living. They pursue their research and constantly innovate hoping to achieve a balance of life and health. After 45 years, the pendulum evens out, Gérard and Rodrigue now give conferences and teach courses that they have created about organic farming which is the key to their success.

There are 180 Holstein cows at the Bouchard Artisan Bio farm, including 105 lactating ones. They eat grass, meaning a variety of 15 plants which bring them proteins, vitamins and minerals. The milk they produce presents a beautiful balance of omega 3 and omega 6. These healthy cows very seldom see the veterinarian thanks to the balanced diet they are offered.

The cheese dairy was founded in 1993. The production of these high quality organic farmer’s milk products has since been then the subject of research and more innovations. It also brings great pride to the management and staff.

Bouchard Artisan Bio is convinced that the organic farming methods that it has been applying will live on. Its future is held by increasing public awareness and education thanks to their knowledge and experience, as well as their partnership with other farmers and herders who have similar preoccupations and research topics.

The goal is to pursue its quality production and to make the business profit respectfully within its values. It applies itself specifically to go against the current trend that is moving towards industrial production. It also targets the particularities of AgroBoreal and of Nordic farming as a distinguishing trait and as an exceptional flavour.